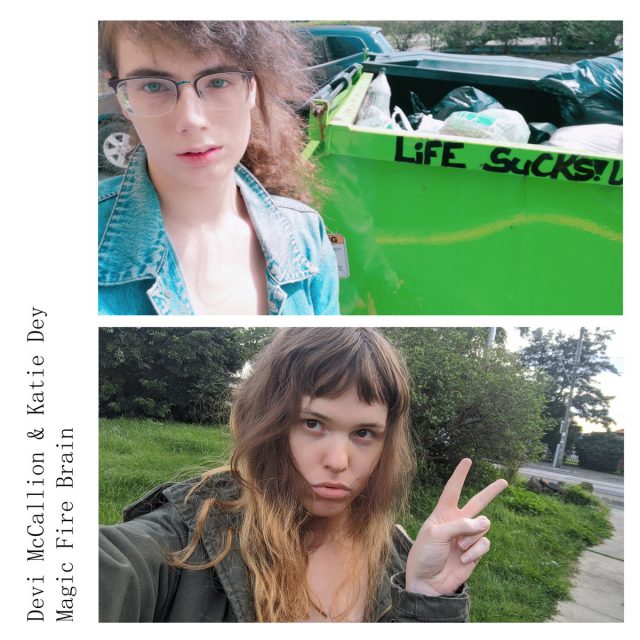 It’s rare to hear someone actually cry on a song. The act feels too raw, like it’s breaking some implicit barrier between artist and listener. But Devi McCallion and Katie Dey push those boundaries as musicians. Toward the end of “Open Heart,” a song from their new collaborative album, McCallion’s voice cracks as she holds out hope for a better life. “Maybe that day will never come/ The day you forgive yourself,” she sings. “I know that it’ll never come/ But I wait for a loving heart/ A loving world.”

Her pleas are swallowed up by a strobing synth as Dey’s voice echoes in the background, propping McCallion up in her time of desperation. A few seconds later, McCallion laughs, scoffing at the ridiculous act of being so open for anyone to hear. But there’s strength in that moment. McCallion and Dey make vulnerability and aggression sound like the same feeling. Or as Dey puts in at the beginning of the same track: “Happy songs echoing/ Weirdly sad but still laughing.” There’s joyful liberation in letting it all out.

And that ache for a loving heart has, at least partially, been filled by the creative partnership that McCallion and Dey have struck up over the last few years. Both artists started putting out music online around the same time, digitally warped songs from separate corners of the internet that gravitated together because there are no corners on the internet. McCallion is based out of Toronto; Dey is in Australia. You can’t get much farther apart than that, geographically speaking, but their music is similarly-minded, dealing with displacement and connection and working with sounds that feel pulled from the heavens or raised up from hell.

Both artists are prolific in their own right. In the past year, each one has put out multiple albums — McCallion as Girls Rituals and one-half of Black Dresses, Dey with the solo releases solipsisters and mydata, which appeared in this Album Of The Week column only a couple months ago. Their collective output is staggering in terms of quantity, and creatively they’ve been on a roll.

That hot streak extended back to their first team-up, released a little under two years ago. Some New Form Of Life demonstrated how well these two could work with each other. Dey’s music is typically prettier and more atmospheric, while McCallion’s is abrasive and loud. Together, they balanced each other out, McCallion’s brash and bratty attitude tempered by Dey’s more stylistically formal strings and plinking piano keys.

They’ve both developed on their own as musicians since then. Their pop sensibilities have only become sharper, and with their new album Magic Fire Brain, they’ve hit a new peak in their abilities. It’s tighter and more refined than their first album, and it’s consistently surprising. Throughout its 30 minutes, they move briskly from the opening keyboard splatter of “Plant Matter” to the heavy closer “Milk,” a pumping club track that begs to be played loud. In between, there are tender ballads, like the Purity Ring-channeling “Trying Not To Die,” and hyperpop perfection, like “Circumstances,” which glides along like Owl City if Owl City didn’t suck. It’s an immensely satisfying collection of sounds — the way that McCallion and Dey break down the walls between genres is invigorating and propulsive and always rewarding. Magic Fire Brain is tender and fun, finding beauty in the chaos of not knowing what will come next.

The songs focus in on that chaos. They’re about dysphoria and not knowing how to fit into this world. The lyrics often return to God and the idea of a creator that would willingly encourage suffering. “Back in Genesis, they never thought it would be like this,” goes the hook to “Plastic.” Sometimes they imagine themselves as the creator: “When I installed the heavens in the sky/ When I made the clouds firm overhead/ When I let circumstance complete you/ You’re flawed just how I intended you to be.” If our flaws are what make us human, then why do we have to be defined by our mistakes? They try to see the purpose in their pain, using music that throbs like a dull ache. “Some wounds never heal/ If you’re lucky they might just scar over,” McCallion sings on one track. “A lot of wounds just get worse and worse with time/ And time goes on and on.”

But while the messages in the music might be defeatist, the songs never sound defeated. These are feverish pop songs that try to find transcendence in how the life tries to hold them down. Part of that escape is the outlet that McCallion and Dey have found in each other. “No need to be embarrassed now/ We have no friends around,” Dey sings on the album’s title track, picturing some closed-off space free of ridicule and judgement. “I got this, I got this, I got this/ I’m tired but I have got this.” On Some New Form Of Life, McCallion and Dey tried to imagine a fresh reality; on Magic Fire Brain, they sound resigned to this one, and finding places within it where they can thrive.

“neither of us rly care too much about promoting it or getting any attention from it so it won’t be a big fuss,” Dey wrote on Twitter shortly before releasing the album over the weekend. “it was just nice to make music with my friend and im grateful i got to do that again.” There’s power in making things that you think no one will hear, or making music just like you would if you were alone. To put that out into the world is brave; when McCallion and Dey do it, it’s magic.

Magic Fire Brain is out now.