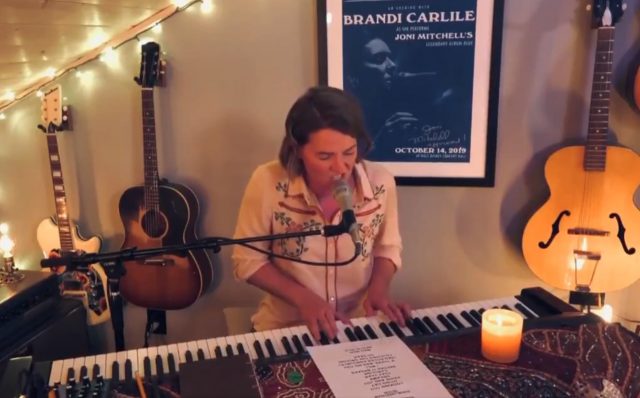 At this point, it might be a cliché to play a slowed-down, serious cover of Tears For Fears’ melancholy 1982 synthpop hymn “Mad World.” In 2001, Michael Andrews and Gary Jules recorded their own stripped-down version of the song for the Donnie Darko soundtrack, and their cover made it to #1 in the UK. Since then, there have probably been hundreds of folky, singer-songwritery versions of the song. But when Brandi Carlile sings it, you have to pay attention anyway.

Carlile has been covering “Mad World” live for years, so maybe you’ve heard her sing it. But if you haven’t, then I would advise you to check out the version that she posted yesterday. Carlile has been playing live-from-home shows lately. In her most recent broadcast, she played her 2009 album Give Up The Ghost in full. She ended it with two covers: Elton John’s “Madman Across The Water” and “Mad World.” She did “Mad World” right.

Carlile accompanied herself on piano, with a cellist accompanying her, and she sang the living shit out of the song. When it kicks in halfway through and she goes into full belter mode, it’s a total goosebump moment. It can’t be easy to do those theatrics in a stripped-down setting like that, but she made it count. Watch Carlile’s cover and the video for the Tears For Fears original below.

We might just all have to start watching these Brandi Carlile livestreams together.